Auburn Hills, Mich. – PREFIX, a recognized concept vehicle, prototype and engineering services company, has announced today that they will field a full-time entry in the 2019 Trans Am TA2 championship as part of their 40th year anniversary celebration.

PREFIX President Eric Zeile said, “After a tremendous 2018 season with Stevens-Miller Racing (SMR) we’re thrilled to announce Marc Miller will be driving the #40 PREFIX Dodge Challenger for the 2019 season to celebrate our 40th anniversary. For 40 years our company has continued to grow. Our performance division saw a great value working alongside SMR and we look forward to having the opportunity to showcase the capabilities of our engineering, prototyping, aviation and film industry divisions as well.”

SMR Owner Joe Stevens added, “Marc is a great asset to our team and we were able to put him in a car several times last year. He won Sebring and finished second at Daytona driving our PREFIX powered Dodge bookending our season with podiums. We could not be more excited about having PREFIX support Marc’s 2019 season and his run for the championship. It was a lot of work to put this program together. The management and marketing teams of both PREFIX and SMR, in coordination with Marc, kept at it until we were able to create this opportunity.”

Driver Marc Miller said, “I could not be more excited to represent PREFIX in celebration of their 40th anniversary. Last season I drove the PREFIX Dodge Challenger in two races and was able to challenge for the win at both events. My experience with PREFIX has been great-I feel like I’m part of the family. I can’t wait to have PREFIX on the side of my car and their power under the hood so we can build on the foundation of last year’s success.”

Zeile continued, “The goal is to continue to underline PREFIX as the leader of engine and drivetrain components in TA2. Having two of the top three cars running PREFIX power last season, as well as winning the championship, underlines our motto, ‘Excellence is Expected.’ Having a branded car for 2019 will continue to raise our visibility in the paddock and with fans. For 2019, our Business Development team will be using the new SMR Hospitality center to engage both current and potential clients from the automotive, aviation, film and amusement industries.” 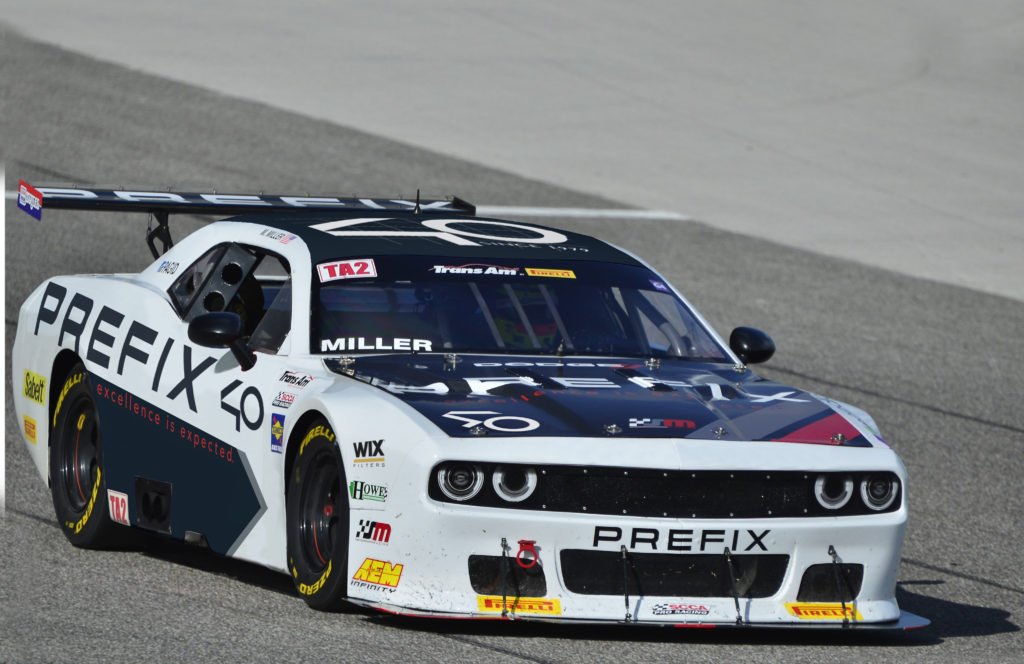 PREFIX Vice President of Marketing, Jhan Dolphin, looks at the relationship with SMR and Miller as an exercise in business development within the Trans Am and support series paddocks.

“Last season we formed technical partnerships with Liqui Moly and Berryman,” Dolphin said. “These came about rather simply due to the efforts of SMR and their marketing staff. With our support of the #40 car comes a focused effort to continue building our business, brand, and customer network.”

In addition to primary branding from PREFIX, Miller will also enjoy support from Sabelt America and Pagid Racing, as well as SMR team sponsors Berryman, Liqui Moly and Wix.

“PREFIX power is under the hood of all of our cars Dodge, Chevy and Ford,” Stevens said. “Having PREFIX Program Manager Rick Talbot looking over our power plants was hugely beneficial last season and we’re thrilled to have his and PREFIX’s support again for 2019. Having Marc behind the wheel as well as our team’s driver coach completes the program. As an organization, we’re in a great place for 2019.”

About PREFIX CORPORATION – Prefix Corporation is best known for being the automotive industry’s number one source for creating advanced concept vehicles and prototypes, as well as providing design and engineering services. They operate four facilities in the Detroit area, with over 250 employees. Their Auburn Hills facility is home to the Prefix Performance division. With an experienced team of engine professionals this facility offers a wide variety of performance products and services, including: Race and street engines, HEMI crate engines, Viper V10 re-builds and performance upgrades, Chassis and engine dyno testing, Dynamic valve train testing, design, fabrication, and on-site engine calibration. They also specialize in specialty vehicle conversions and low volume custom vehicle production.

About Marc Miller – Marc is a professional race driver and Michigan native. In recent years Miller has been a championship contender and race winner in the IMSA Continental Tire Sports Car Challenge, Trans Am Series and IMSA WeatherTech Series GT3 class. He has competed at the 24 Hours of Le Mans in 2015 (Dodge Viper) and 2016 (Porsche RSR) and was recipient of the IMSA Extreme Spirit Award in 2016. When not racing or traveling as a professional driver coach, Miller spends time with his family in Holland, MI. Follow Marc on Instagram: marcmiller001 or visit his website at www.theMarcMillerShow.com.