“P” is for Podium 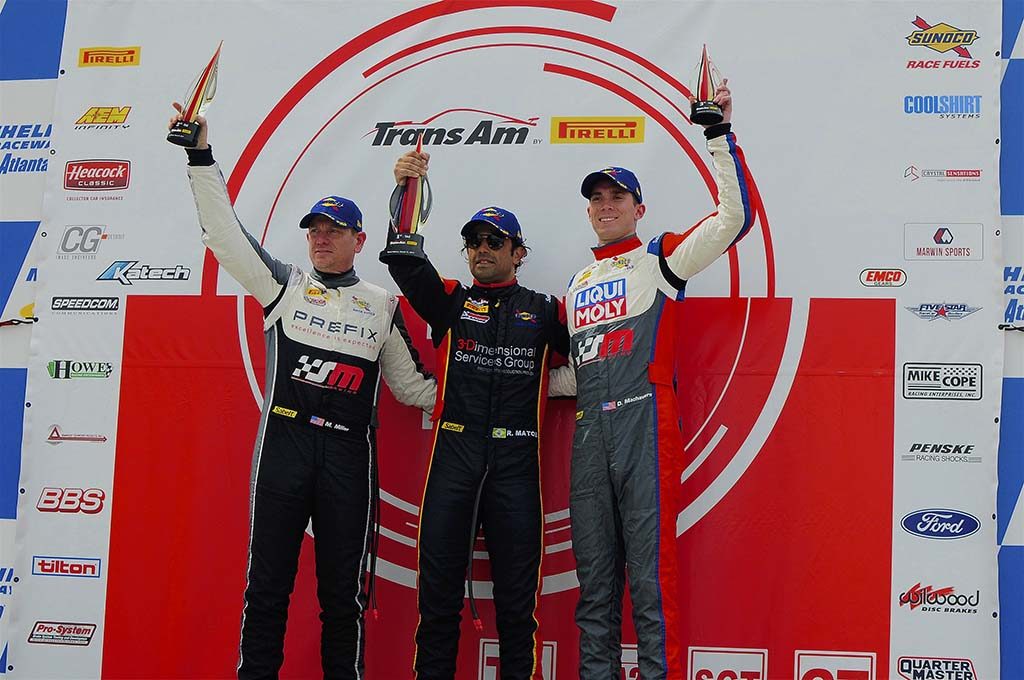 Braselton, Ga.–Stevens-Miller Racing (SMR) arrived at Road Atlanta with high expectations for a podium finish. In the end SMR drivers occupied not one, but two, steps of The Trans Am Presented by Pirelli’s TA2 category’s victory rostrum.

“All around it was a great event for our team” SMR Owner Joe Stevens said. “Having both Marc Miller and Dillon Machavern standing on the podium was an amazing feeling. We had five cars in TA2 and my guys had them running like clockwork the entire weekend. Finishing second and third was amazing. We’re so close to the top step — I know we’ll get there.”

Marc Miller, driving the PREFIX 40th Anniversary SMR Dodge Challenger, and Dillon Machavern, in his Liqui Moly PREFIX-powered Ford Mustang, were fast right off the trailer sitting second and third in the official practice session and qualifying fourth and fifth in the 31-car field. 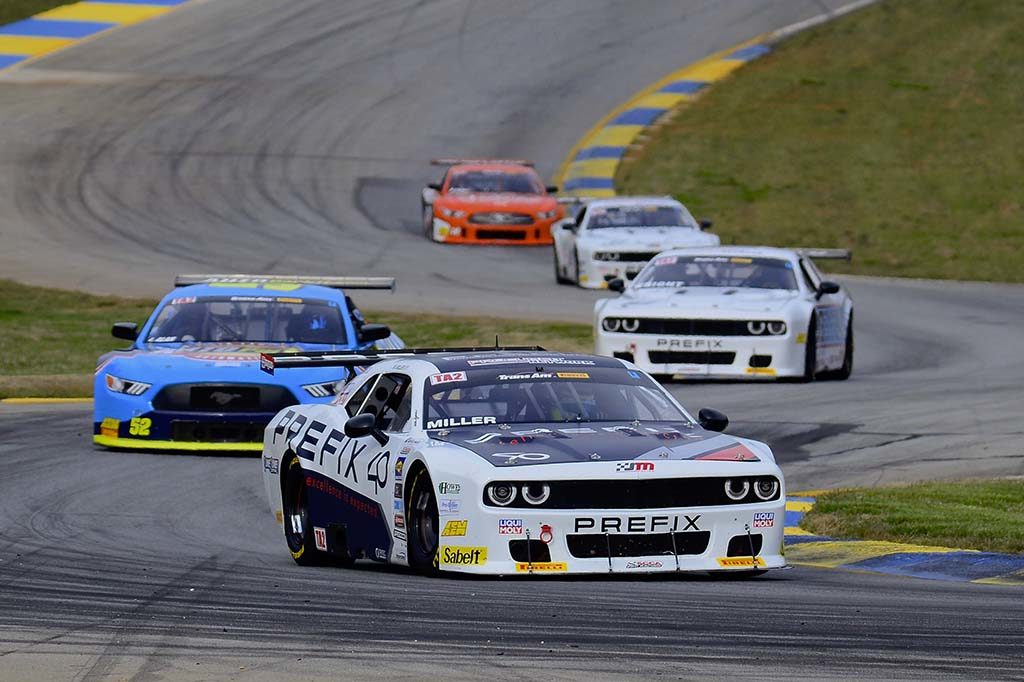 “With the top five cars within seven tenths of a second in qualifying, I knew we had a great chance in the race,” Stevens said. “Marc’s car was extremely fast down the long back straight and into turn one and Dillon was quick everywhere. Dillon had the misfortune of catching slower traffic on his fast lap otherwise he would have been on pole.”

Miller said, “We had great track-side support from the Stevens-Miller Racing crew as well as Prefix Performance engines. We all worked together and shared information and that resulted in better results for everyone which is really rewarding.  It was even more special to turn in a great double-podium for Stevens-Miller Racing. It is great to have teammates on the podium and even better for our crew and team partners to be rewarded with a strong finish!”

“Machavern is the epitome of a cool,” Stevens said. “We’d had teething troubles with our Mustang since day one-it was like it was possessed.  We finally got it worked out and it was running beautifully. Dillon drove a great race biding his time until the inevitable cautions came and he made the most of it.” 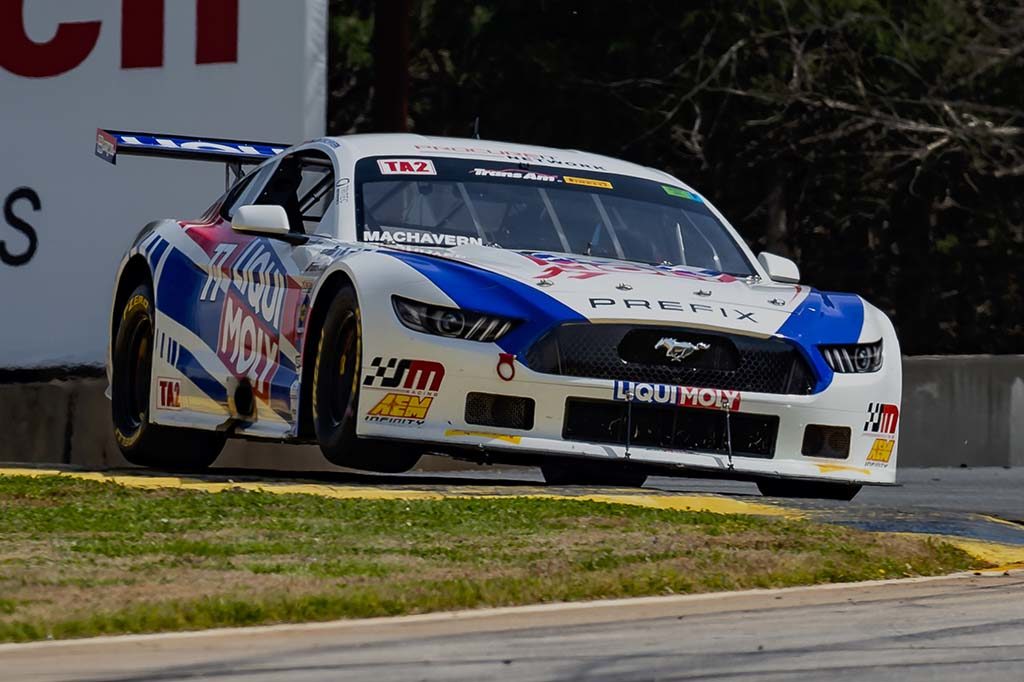 Starting fifth Machavern was up to forth behind Miller and was running faster times than the leaders. Traffic became a factor as the leaders started lapping cars with Machavern settling down into a comfortable pace five seconds back.  “I knew the yellows would come,” Machavern said, “they always do. I decided to hold my pace and save my tires for the end — it can be really hard when you know you can run harder, but I felt I had a car that could challenge for the win and saving my tires was the way to give me the best chance.”

On the first restart, Miller went side-by-side with the leader into turn one with Machavern moving up to third. Right on the bumper of Miller through the esses and up the hill into five Machavern pressured but Miller was quick to defend. With 12 laps to go it was a three-way battle for the win.  Three laps later, the full course yellow came out again. This time the race would go green with only three laps to go. All three got a good start with the leader having to cover Miller’s again into turn one.  Nose to tail, they ran to the checker with Machavern setting the fastest lap of the event on the final lap.

“Those last three laps were amazing to watch,” Stevens said. “A great race and a great performance by our entire crew and team of drivers. The gloves had come off but all three drove clean to the end. It was a great feeling to have two of my drivers on the podium.”

Overall, SMR had a great event. Brian Swank in the Berryman Products PREFIX Camaro moved up 10 positions to finish 14th.  Alex Wright in the No. 83 SMR Dodge Challenger ran great all weekend but had to settle for 20th after ending his race in the turn five barriers on the final lap. Returning driver Drew Newbauer in his first trip to Road Atlanta drove a steady race to finish 21st. 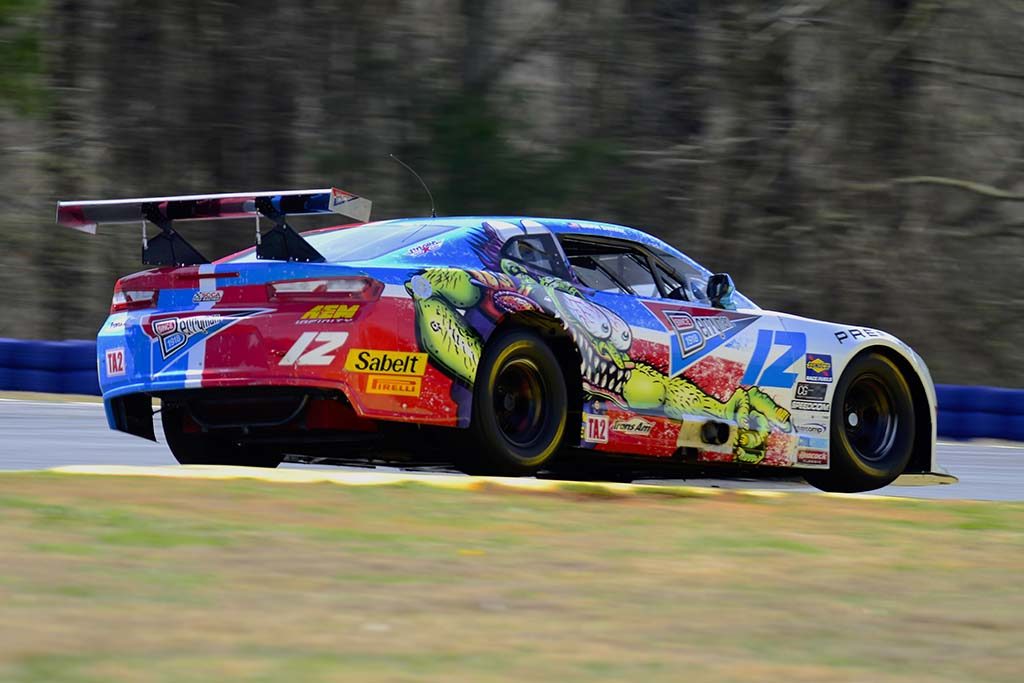 Stevens said, “Road Atlanta is probably the most difficult circuit we visit. It’s a roller coaster of a track the changes in elevation makes it hard to see your marks–plus it’s ultra fast. Other than having to change a rear end in Dillon’s car just before qualifying all the cars ran great, a testament to our crew. We’re in it to win it and we’ve got two very fast drivers and cars in the top five in points with Marc in second and Dillon in fifth.  Now it’s back to the shop before the long tow to Northern California for the third round at Laguna.”