Columbia City, Ind. – Stevens-Miller Racing (SMR) heads into the heart of the season with drivers Marc Miller and Dillon Machavern leading the championship. With four races in six weeks, the championship is on the line.

“We knew going into the season Marc and Dillon would give SMR a great one-two punch in the fight for this year’s championship,” Team Owner Joe Stevens said. “This run of four races in six weeks could very well decide the championship.” 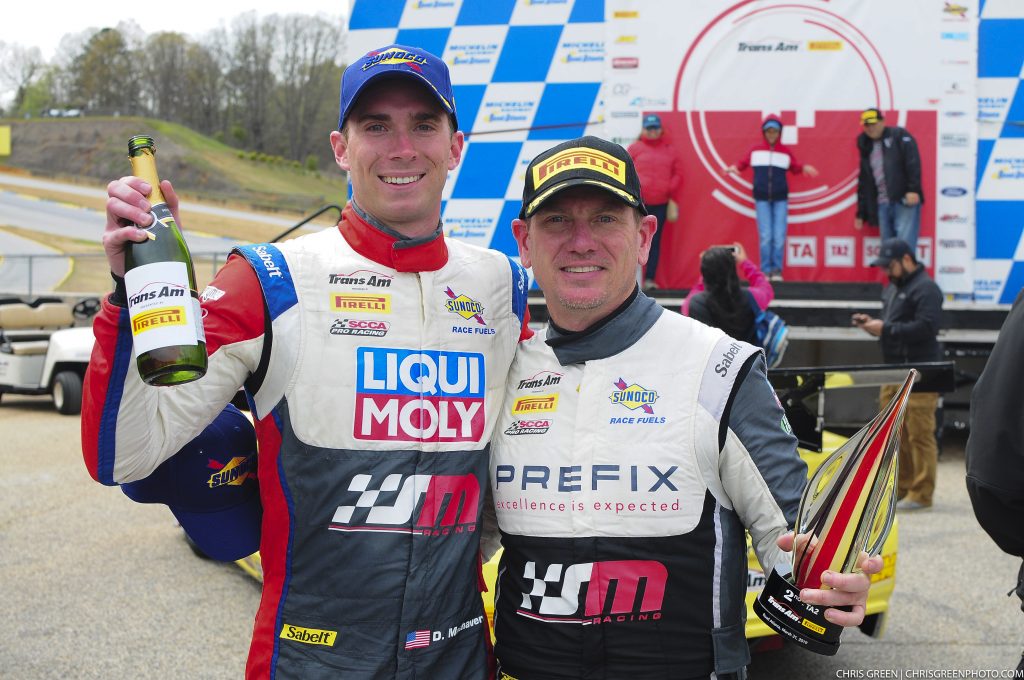 After a slow start, Machavern lit up the scoring pilon with a string of four podiums in six races. Machavern in his Stevens-Miller Liqui Moly Mustang moved from ninth to second and closed the points gap to championship leader Miller.

“It’s been a great run,” Machavern said. “SMR never stops pushing. We ran into some technical issues early in the season, but we’ve overcome them and I’ve been on the podium ever since. These next four races are critical if I want to win the championship – it’s time to take my Liqui Moly Mustang to the front.”

“We’re in it to win it,” Stevens continued. “Each of the three brands have different strengths. We’re the only team that fields all three brands and that has proven to be a good move. One race the Dodge has been the car to drive and the next the Ford. We continue to develop our five cars and our drivers through testing. Week after week and race after race, my guys are pushing hard to win the TA2 championship. One-two in the championship is right where we want to be this time of the season.”

“My Prefix Challenger has been great,” Miller said. “SMR continues to develop the car and I consistently can tell the difference. By nature, the Challenger is prone to understeer, which is something we’ve worked on a ton but we’ve never been able to totally dial out. Our recent test at Mid-Ohio uncovered a couple of things that just might resolve the issue. Like Dillon said, the SMR guys never quit­ – I can’t wait to get to Indy and see if I can put this bad ride on the top of the box!”

Stevens added, “Besides Marc and Dillon we’ll have Brian Swank in the Berryman Products Camaro and Alex Wright in our second Challenger at both events. They both finished  Top 10 at Detroit and are both gaining speed and consistency. Brian and Alex have shown how close each of the different brands are. They consistently finish one behind the other and that’s a testament to our preparation, PREFIX power plants, our Howe chassis, and the Trans Am regulations package.

“Last year Indy was more like a brick oven than the brickyard and this year we could be in for the same! We need good points finishes and all four cars home in one piece as we’re at Mid-Ohio just three days later. The time will come when the guys need to take the gloves off. With Indy, Mid-Ohio, Road America, and Watkins Glen one right after the other, we need consistency and focus to bring home the championship for SMR and our sponsors.”