SMR owner Joe Stevens said, “The Northern and Southern Cups are perfect for my customers and we’re thrilled Alex Wright, driving our Berryman Products Mustang, is the Northern Cup champion for 2020.” 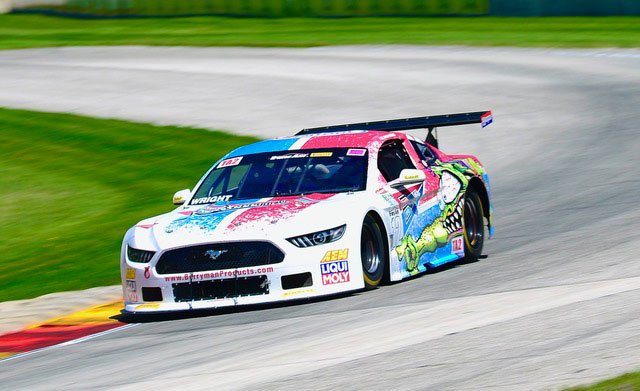 Wright said, “What a season!  I’m so pleased and proud that we accomplished what we set out to do this year. Between the action on the track and the events in the world, 2020 has been a rollercoaster. With everything that’s going on, I couldn’t be more eager to go racing in the Berryman Mustang.

“Speaking of Berryman— a big thanks to the team in Arlington, Texas, for letting me represent them with the best livery in the series.  It’s been a treat to see people react to the Chemtooler. I can’t count how many thumbs up and waves I’ve gotten as I rolled through the paddock. It’s been a pleasure to represent such a great American company.”

“I’m also grateful to Joe Stevens and to everyone at Stevens Miller racing,” Wright continued. “The crew has been excellent, all season long. Their commitment and willingness to go the extra mile truly sets them apart. Special thanks to my car chief Nick Allard for all his hard work. He’s always working to improve the car and nail our setup.”

Berryman Products Marketing Director Beau Blankenship said, “The Berryman Family could not be prouder of Alex Wright and the entire Stevens Miller Racing team. SMR’s perseverance and dedication throughout these difficult times has truly paid off by winning the Northern Cup and we’re so glad to be a part of it.”

Stevens said that while Wright has sewn up the Northern Cup, JP Southern Jr. is continuing his battle for the Southern Cup championship. “JP is driving his ProcureIT Networks Camaro and is only 12 points back. JP has had some tough luck, but Chris Martin and his Inc. Magazine Top 500 company ProcureIT system stepped up to support JP this year and we’re so glad they did.”

Martin said, “We’ve been an associate sponsor with Joe for the last year or so, and he, his drivers, and the series have been fantastic. We met JP at Daytona last year and we’re thrilled to be a part of his program. He had a tough race at VIR, suffering a big crash, and I’m glad we can help him turn the car around for COTA. Now he needs a good clean race and win the Cup. We’ll be there supporting JP and celebrating our third year of being named to the Inc. 500 fastest-growing companies in the U.S.”

The SMR team will be busy at COTA fielding six cars. “We have a full tent at COTA,” Stephens said. “Our program at COTA includes customer-owned cars, rental cars and, of course, Mike Skeen in our Liqui Moly, Katech, Howe Racing Enterprises Ford Mustang. Besides TA2, we will also have cars in SVRA group six. Our program is very flexible. Your car, our car, part season, full season, or just one race — we’re full service including at regional SCCA GT2 events.”

Stevens-Miller Racing (SMR) has one of the highest winning percentages in Trans Am’s TA2 category and are the 2019 TA2 champions. SMR’s staff has earned 30-plus podiums, three championships, multiple Hard Charger Awards, Rookie of the Year, and more. The team’s focus is achieving the driver’s desired goals. Whether that’d be just having fun, developing driver skill, or winning championships, SMR does it all and has the winning history to back it up. See www.stevensmillerracing.com for more details about our programs and Arrive & Drive opportunities.