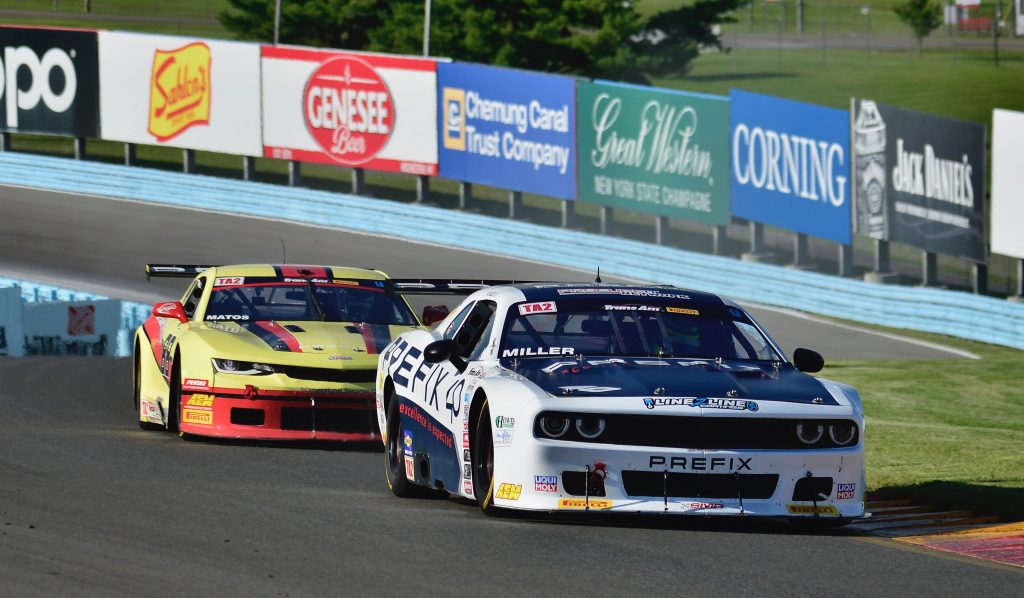 “We prepare our cars to the utmost–but we cannot control the surrounding cars or drivers,” Team owner Joe Stevens said.  “The Watkins Glen circuit is very technical, and in the race ‘The Bus Stop’ rapidly became our nemesis. Every car in our stable except the Liqui Moly No. 77, driven by Dillon Machavern, had an off there. The collateral damage has us under the gun for VIR, but we’ll be there with five cars ready to go.”

Marc Miller’s weekend  got off to a good start qualifying second, only seven-hundredths of a second off pole. The tight Watkins Glen field once again included drivers from NASCAR’s Xfinity series. Qualifying proved how tight the field was with the top five qualifiers posting times within seven-tenths of a second. At the drop of the flag Miller pressured the leader from second with Machavern just three seconds off the lead in seventh. In the end, Miller would end up ninth and Machavern would retire.

After the race, Miller said, “That was a tough one. We fought hard for the lead, but it was really tight up front. After a couple of laps, I got passed but was able to retake second entering the bus stop. Just as I exited, I was hit from behind and sent into the wall. Thanks to the SMR crew, my day was not done. We came from a lap down taking the car from outside the top 25 to ninth, just four-thousandths of a second out of eighth at the line.

“I can’t say enough about SMR, my car chief Jake Thornton, and Howe Racing. I thought I was done, but she kept ticking — allowing me to put down qualifying laps the rest of the race. Huge thanks to all of the SMR crew. Now it’s time to look forward to VIR and get our SMR, PREFIX 40th-anniversary Dodge back on the podium where it belongs.”

While Miller started his weekend off right, Machavern’s was challenging from the start. An issue in the first practice of the weekend led the team to switch from the primary chassis to a brand-new car. The SMR crew worked through the night to prepare the fresh-from-the-shop Howe Racing Enterprises, PREFIX Choice powered-No. 77 Liqui Moly Camaro for Thursday’s early practice. In the end, despite the team’s best efforts, Machavern’s weekend was undone by a $3 part.

Machavern said, “After learning a lot in practice and using qualifying as a test session, I had a lot of confidence heading into the race. Once the green flag dropped, I started moving through the field. Unfortunately, when I made it inside the top five there was a hardware failure in the right front suspension that ultimately ended my race. I’m really proud of the effort the entire SMR crew put in this weekend. Putting a brand-new car on track without turning a wheel beforehand and being competitive is impressive and shows the level of skill and dedication that the SMR Liqui Moly team brings to the table.”

“I lost three positions on the start,” Swank said. “On lap six, I had position going into ‘The Bus Stop’ and the car I was passing made contact. It took off the left front fender and it forced me to pit. The crew removed the fender and I went back out, setting my fastest lap of the weekend. It was a bad race as far as points go, but I had a blast pushing myself and my damaged car’s limits for almost an hour.”

Alex Wright was once again in the SMR No. 83 but he and new team member Doug Winston in the No. 11 SMR, DM Electric, Dodge Challenger, both had off-track excursions that resulted in front splitter damage.

Wright said, “I had a great car, and the pace was starting to come, but I made a mistake and ran through the grass in ‘The Bus Stop.’ With splitter damage, I had to pit for the crew to remove it.  Without the splitter the handling of the car was pretty bad. I continued to make laps, but I was pretty much a non-factor after that.  It was a real heartbreaker after starting with such a good car.”

Stevens concluded, “‘The Bus Stop’ and the resulting collateral damage was hard on everyone and, as I said, it will push us to our limits during this quick turnaround to VIR. I have to thank my entire crew. This series of races has been a brute of a schedule. We’ve added a new car, changed engines, fixed crash damage, and had six cars ready to go. My pro drivers and our customers —  despite the issues — know we always give them our best. We’ve had only two mechanical DNFs all year and that’s a testimony to my crew and our partners all pitching in. PREFIX and Howe have been hugely helpful. Having companies including Liqui Moly, Berryman Products, ProcureIT Network, Wix Filters, Sabelt, and Pagid behind us is amazing.

“In less than 24 hours we’ll be headed to VIR loaded for bear. My guys, my drivers, and my entire team continue to push, and I could not be more proud of all they do. We’ve added a new Howe, PREFIX Choice-powered Camaro to the SMR fleet that we will have on hand for the remainder of 2019 and have available for the 2020 championship. We want this championship and we’re committed to do what it takes.”

Stevens-Miller Racing (SMR) over its history has one of the highest winning percentages in Trans Am’s TA2 category. SMR’s staff has earned 25+ podiums, two championships, multiple Hard Charger Awards, Rookie of the Year, and more. The team’s focus is achieving the driver’s desired goals. Whether that’d be just having fun, developing driver skill, or winning championships, SMR does it all and has the winning history to back it up. See www.stevensmillerracing.com for more details. IMAGE By Chris Green