Road to the Championship

Columbia City, Ind. – Going into Road America, Stevens-Miller Racing’s Marc Miller and his No. 40 PREFIX Dodge has built a 61-point lead in The Trans Am presented by Pirelli’s TA2 championship. Dillion Machavern driving the team’s Liqui Moly Ford is currently second in the Championship and looks to rebound after a tough weekend at Mid-Ohio. 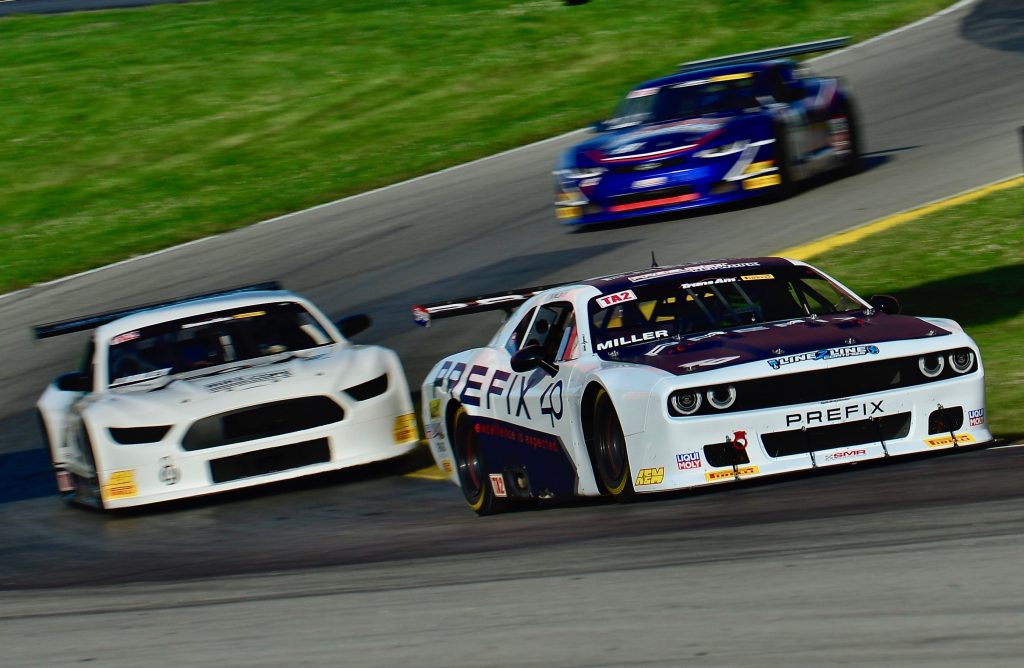 Stevens-Miller Racing’s owner Joe Stevens said, “Marc has done a fantastic job this year. With back-to-back wins at Indy and Mid-Ohio he’s stretched his lead over his teammate Dillon Machavern. It’s a long road to the championship, but the end is in sight. Marc will need strong consistent finishes in the last few races to take home the title.”

“It has been an amazing year for me,” Miller said. “Probably one of the best of my career. The team at Stevens Miller Racing (SMR) has never stopped developing my PREFIX Dodge and it’s paying off. Now I need to have good solid finishes and stay consistent. There are four stops left on the road to the championship. It would be fantastic to win this for SMR and PREFIX, but the fight is not over until the last checker at Daytona.”

Stevens added, “Dillon had a tough weekend at Mid-Ohio in our Liqui Moly, PREFIX-powered Ford Mustang. He got caught out on a restart that ended his race early. It was his first DNF this season, so it was tough. This is Dillon’s first full year with SMR and he’s done a really good job. The fight is now on for second in the championship as Dillon only has two points over third going into this weekend’s race.”

Machavern said, “Yeah, things did not go our way at Mid-Ohio, now I have some serious work to do. Marc and I have had a great season, but my Mid-Ohio DNF really cost me and now third is right on my tail. My Liqui Moly Mustang has been really strong, and I love Road America. I need a good race – a win would go a long way in holding on to second and put some pressure on Marc for first. We know what we have to do from here on out.”

Stevens said, “Brian Swank and Alex Wright will be in our other two cars this weekend. Both of these guys have been doing a great job this year. Alex came into the season with absolutely no experience in these cars and Mid-Ohio was the first time Brian had been to a track he’d raced on before. Having Brian driving our Berryman Products Camaro and receive the Mid-Ohio COOLSHIRTS Cool Move of the Race as well as move into the top 10 in points was just fantastic. Their results show how the quality of our arrive-and-drive and driver development programs. Marc Miller is an asset and is as our driver’s coach. My team is solid — racing, coaching, and marketing. We’re maturing and really hitting our marks on track and off.”