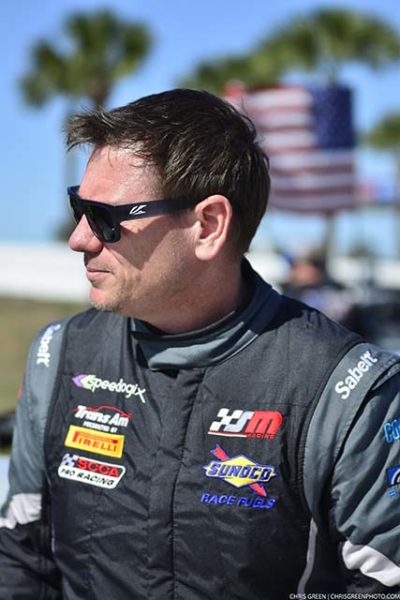 Columbia City, Indiana (February 7, 2018) – Stevens-Miller Racing today announced that winning sportscar driver Marc Miller will join the team’s Trans Am TA2 line-up in the #12 Dodge Challenger for the 2018 season. Miller, of Holland, MI, will be reunited with the team after a runner-up finish at the 2016 Detroit GP in his Trans Am debut.

“Having Marc’s driving talent, marketability, and coaching abilities under our canopy this year adds huge value for our renters, this brand, and the Trans Am Racing series,” said Stevens-Miller Racing Team Owner, Joe Stevens. “Our focus will be keeping Marc up front and the #12 Dodge Challenger in top working order. We have a lot of talented competition this year and everyone has their work cut out for them. As for now, its heads down and focusing on assembling race vehicles worthy of a championship title.”

Miller is especially looking forward to building on his experience racing in both Trans Am and in a Dodge. He will be returning to the Dodge brand after competing in a Dodge Viper in both the IMSA WeatherTech SportsCar Championship and the 24 Hours of Le Mans in 2015 and in the 2016 North American Endurance Championship.

“The offer to join Stevens-Miller will prove to be a great fit,” said Miller. “The team gave me my first opportunity in Trans Am and it seems ideal that I am able to return to the series with them and help represent the Dodge contingent and interact with such a passionate fan base.”

Though Miller has only raced with the team at one official event (Detroit Grand Prix), he is no stranger to the Stevens-Miller Racing program.

“We have only had one outing together as a team but I have done both coaching and testing with Stevens-Miller over the last few years,” Miller continued. “I have talked with Joe about putting together more races in the past, but thankfully we were able to put this program together for this 2018 season.”

The team is looking to add the addition of a primary partnership in time for the 2018 season opener. A complete Stevens-Miller Racing driver line-up and 2018 team partners will be announced soon.

Miller will also continue his relationship in the IMSA series paddock with CJ Wilson Racing and expects to have additional announcements in the near future.

About Marc Miller – Marc is a professional race driver and Michigan native. In recent years Miller has been a championship contender and race winner for CJ Wilson Racing in the IMSA Continental Tire Sports Car Challenge and race winner with the Riley Motorsports Dodge Viper team at Petit Le Mans in 2016 in the GTD class. He has competed at the 24 Hours of Le Mans in 2015 (Dodge Viper) and 2016 (Porsche RSR) and was recipient of the IMSA Extreme Spirit Award in 2016. When not racing or traveling as a professional driver coach, Miller spends time with his family in Holland, MI. Follow Marc on Instagram: marcmiller001 or visit his website at www.theMarcMillerShow.com.